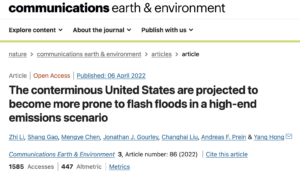 One recent study, entitled “The conterminous United States are projected to become more prone to flash floods in a high-end emissions scenario” led by the HyDROS group was just published in Nature Commun Earth & Env. As results indicate, US floods are becoming 7.9% flashier by the end of the century assuming a high-emissions scenario. The Southwest (+10.5%) has the greatest increase in flashiness among historical flash flood hot spots, and the central US (+8.6%) is emerging as a new flash flood hot spot. Additionally, future flash flood-prone frontiers are advancing northwards.

This study has been receiving attention from different sectors. Our lab director Dr. Hong and collaborator Dr. Gourley have been interviewed by local, national, and international media. Here lists a range of newsletters that covered our study.

As of today (06/06/2022), this study has been mentioned in 60 news outlets, being in the top 1 percent among articles published by this journal.